When the Ardor Reactor (a heart shaped space station which spreads love across the galaxy) is attacked, a glitch in the XOXO Matrix causes the station to explode. As consequence, Anti-Love begins to seep into space, releasing evil creatures and enslaving the populations that were once at peace. It's up to the Lovers to save the galaxy!

As cutesy as the storyline may well be, the real charm comes from the core mechanics and the team building skills produced as a result. Navigating procedural space in a large circular spaceship containing far more rooms and equipment than crew, players are forced to run from room to room in the spacecraft, whilst maintaining high levels of communication from across the couch at home. There are multiple enemies incoming from the direction of the starboard bow? Quickly, hop into the nearest facing turret. Is the ship navigating a treacherous cavern full of laser wheels? Operate the ships shield and prevent any further structural damage. Swathes of enemies are overrunning the ship? Hit the switch on the Yamato Cannons and watch them get wiped out, but make sure to time this wisely (as there's a recharge penalty to this).

Essentially, it's all fun and games. Engines, shields, canons and lasers can be upgraded through an assortment of gems which produce varying effects on the ships defensives. Part of the fun of Lovers In A Dangerous Spacetime is in discovering the effects such combinations have. Not to mention that they will help to keep you alive…

As game progression occurs, players are able to unlock more upgrade slots, space crew and various new ships which allow for returning players to further mix up the gameplay. The orange ship (pictured above) for example, adheres to strict policies regarding ID access for the various rooms within its hull and players may only enter rooms indicated by their characters colours. By allowing one player to exclusively control shields whilst permitting the other access to the Yamato lasers (the big red blow everything up button), this further shifts the levels of coordination necessary to complete each level and is sure to shake things up for the more seasoned players.

It goes without saying that the most rewarding gameplay comes from the multiplayer modes, however, a strong single-player experience is still available for drop in and outplay styles. Rather than a second crew member, the player instructs their very own space pet (shout out to Pythagoras the Pig) to whizz around the varying rooms to deal with enemies or operate shields. The AI here is reliable enough to not hinder the player, but the social element that made the game fun becomes admittedly somewhat mechanical, likely a feature destined to be used for polishing up any remaining trophies players may be seeking... Go call upon some friends round and get the controllers out!

Top tip: If you've had PlayStation Plus for the last year or so, you may (like myself) discover that this game is already available on your console!

Lovers In A Dangerous Spacetime was released on the Nintendo Switch on the 3rd October 2017 - a perfect console to pick up play the local co-op with a friend or partner! 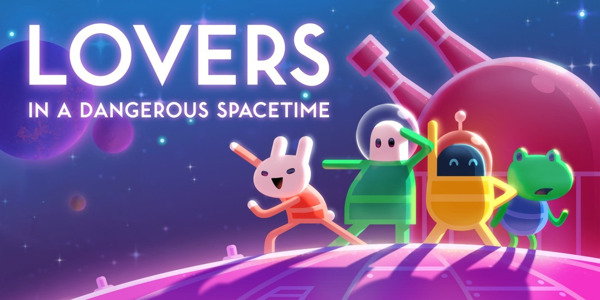