During last month’s EGX Rezzed which took place shortly before the Easter holidays, I met Joe Richardson, the creator of Four Last Things - a point and click adventure which is as gluttonous for Sin and surrealism as I would be for Easter Eggs in the days to come.

Stylistically, Four Last Things takes 'games as art' quite literally and those with a refined taste for Renaissance art, classical music or the just plain unusual will have much to lust after. Public domain Renaissance paintings have been collated together and animated into images that almost look untouched by modern hands. From Kickstarter backers who have been spliced into medieval scenes and still characters brought to life in humorous style and movement, the devil is in the detail with this game (and suggestively within the storyline).

For fans of Monty Python and surrealist humour, look no further. From the funny walk to the quirky dialogue, the game sings on nigh (or Ni) to the praises of all things Pythonesque and you can get a sense of this from Joe’s writing style below:

In the beginning, God created the heavens and the earth. God saw all that he had made, and it was good. Then the Lord God formed a man from the dust of the ground and breathed into his nostrils the breath of life, and the man became a living being.

'Ooops,' said God, seeing he had created a fool. But before he was able to remedy his error, man spoke;

'No backsies!' he chirped, and scuttled off into the forest.

Story-wise, players control a protagonist who has travelled miles to seek forgiveness, only to find he’s arrived at the wrong church. In the bureaucratic confusion that ensues, it is suggested that to be absolved of sin the protagonist must recommit all his sins (which there are many) within this new catchment area. And so, begins the premise for Four Last Things.

Four Last Things is available to buy on Steam, so go check it out, it'd be a Sin to miss it! 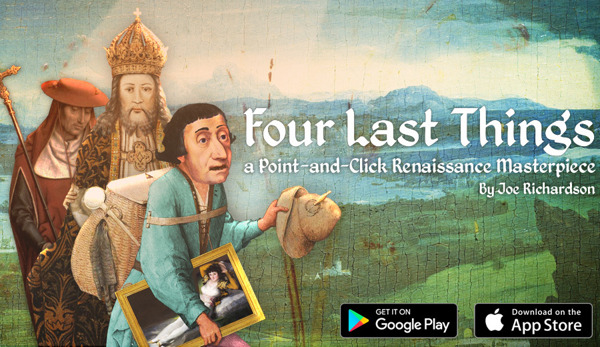